Representative of Supreme Religious Authority: We must convey Hussainian cause to the world, focus on the youth, maintain values and ethics 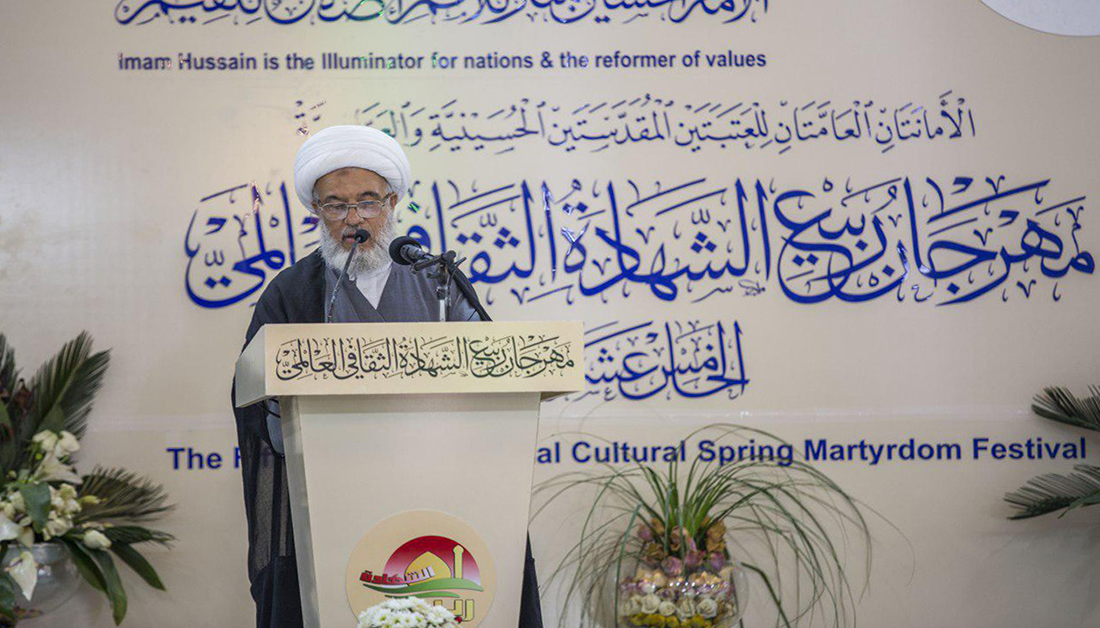 The representative of the Shia Muslim Supreme Religious Authority, sheikh Abdul-Mehdi Elkerbela’i, delivered a speech – on behalf of the Imam Hussain and the Elabbas Shrines – at the closing ceremony of the 15th Martyrdom Spring International, Cultural Festival – held at the Imam Hussain Shrine, in which he emphasized that Imam Hussain’s cause should resonate all over the world, and called for focusing attention on the youth and for vigilance against the deterioration of values and ethics.

Elkerbela’i said, “In the month of Sha’ban, which coincided with the 10th edition of the festival, men, for the sake of God, responded to a call for arms against ISIS, which was issued by a descendant of Imam Hussain (Peace Be Upon Him) ‘sayyid Ali Essistani’ — they laid their lives for their country and achieved victory; this is the Hussainian martyrdom revolution of today.”

He extended his gratitude to the figures who came from different parts of the world to attend and participate in the festival, appreciating their efforts in the scientific, epistemic, and cultural scope of identifying Imam Hussain and his reformation method.

He added that, “All the activities, such as scientific, epistemic researches, and poems of faith the festival witnessed for 15 years have a big impact on our brothers in faith and equals in humanity.”

Elkerbela’i stressed the importance of focusing attention on the youth and educating them, for they are facing a wave of intellectual, ideological, and ethical fluctuations, such as atheism and irreligion.

He warned against the deterioration of social values and ethics caused by dangerous fluctuations in the age of technology, intellectual invasion, and the emergence of titles covered with the allegation of “freedom, development, and evolution” that are meant to deceive those who are inexperienced in life and the Hussainian immortality.

In Picture: Message of peace in flowers from plantation of Imam Hussain Shrine participating in flower exhibition in Baghdad